Do you understand art?

Last week somebody told me he doesn’t understand art, to which I replied I don’t either. Now that I am thinking back, I realize I wasn’t totally kidding.

I have studied art for three years, got my bachelor’s degree and I am pursuing a two-years Master in Fine Arts. Yet, I still feel miserable when confronted with some works of art.

Two weeks ago, my colleagues and I went to Ikon Gallery in Birmingham where three artists were exhibiting: Takehisa Kosugi, Julie Brook and Vanley Burke. We were not told what the trip was about, so I didn’t have time to do any preliminary research about the exhibition – which I always do to pretend I know shit (just kidding, I’m the lazy type) –. To put it in a few words: I didn’t know anything.

Visiting an exhibition you know nothing about, especially in a city you just discovered is quite an exciting experience. But my excitement faded when I entered the first room.

There were pocket radios hanging from the ceiling, an electric fan in a corner of the room and another one on the opposite side. Two projections of water waves were partly overlapping on the wall. Apart from this installation, there were three or four socles with unclosed plastic containers on top of them. They all contained white powdery material, inter alia. Some people of our group played with and even tasted it until a staff member noticed and stopped them. I was about to do the same to be honest (playing with it, not stopping them) as the blinking LEDs hidden in the white sand looked like an inviting call to interaction.

I didn’t get it then, mostly because I was disappointed by the fact that I would have to make sense out of this collection of nonsense in order to appreciate it, but now that I have read a bit about Kosugi’s background (a pioneer of experimental music and somewhat related to John Cage), I can catch a glimpse of the meaning of Mono-dharma, electronic (1967): distant objects and entities like sound, wind, water or light, brought near by their connection to the wavelength phenomenon.

I skipped Brook’s work because I’m not sensitive to video art and the room was narrow and full. I went straight to At Home with Vanley Burke. 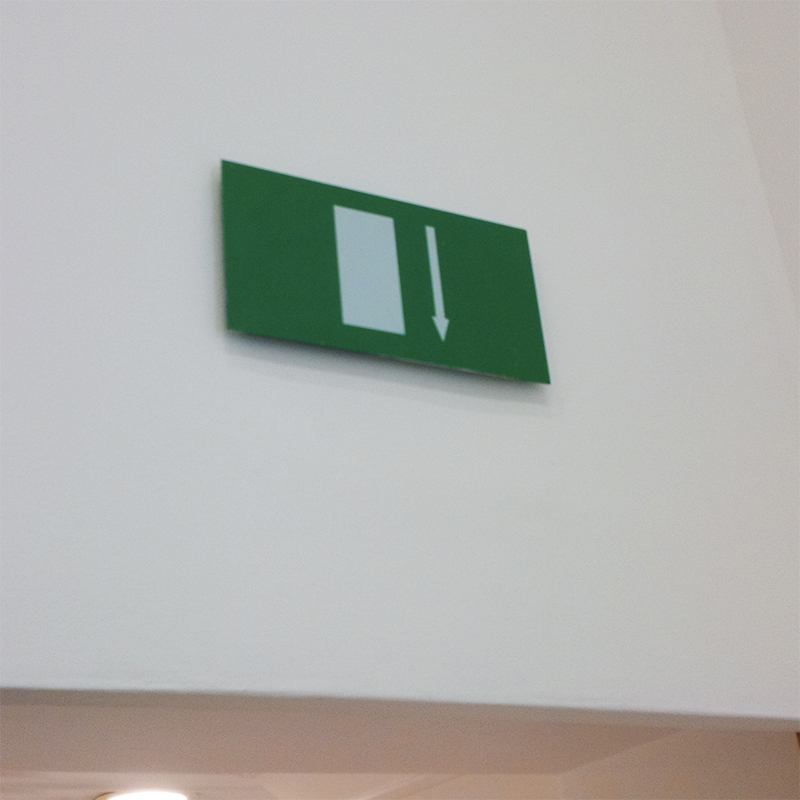 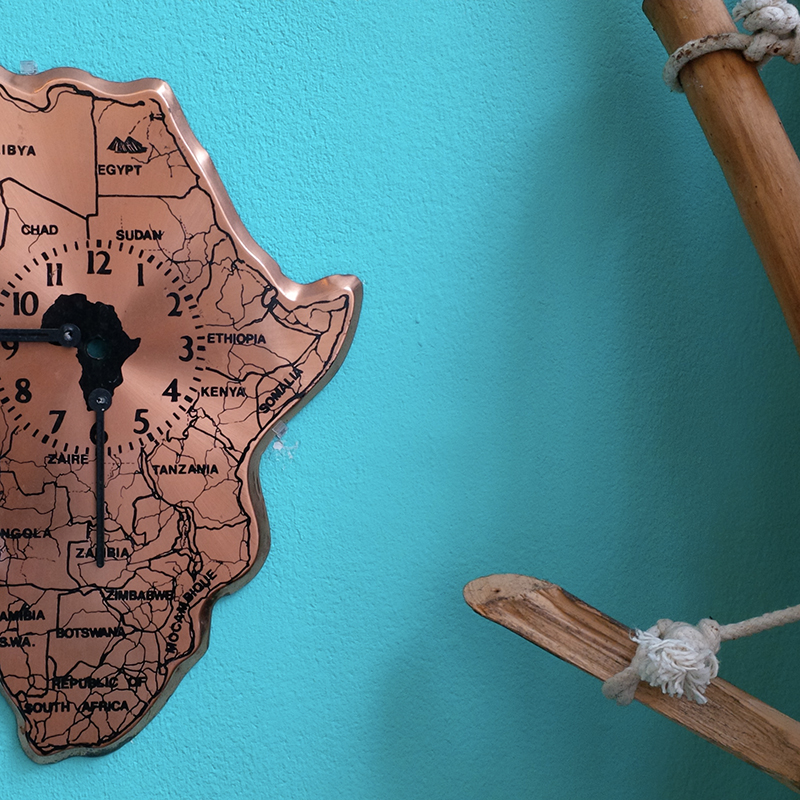 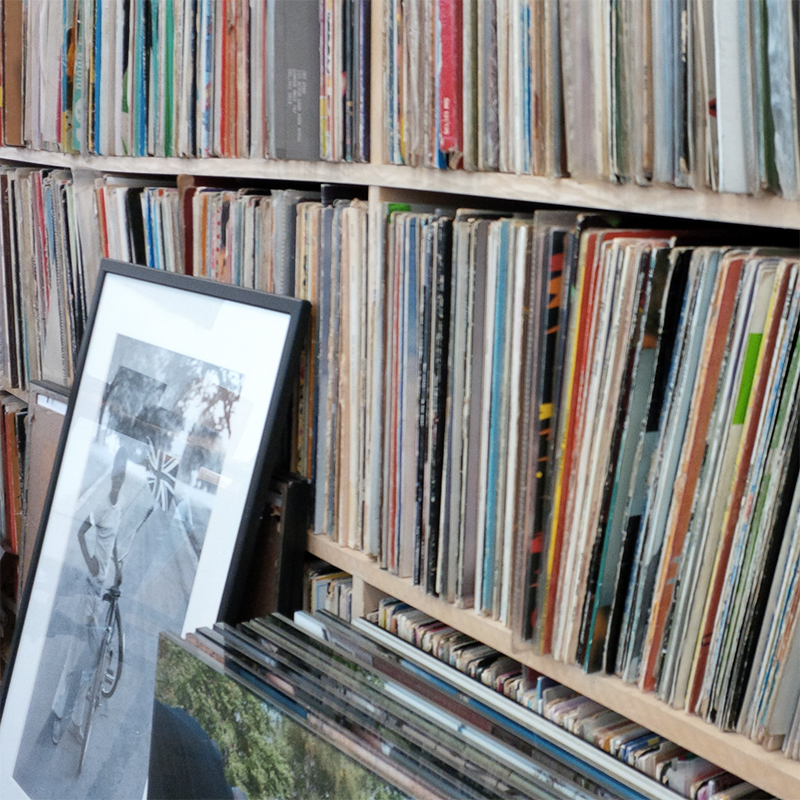 Burke’s exhibition was destabilizing for it was very immersive: we were literally invited to his home. The space was divided into actual rooms (the bathroom and the toilet were missing though) which were populated with personal belongings, including assorted objects, handcrafted tools and ornaments, photographs, a massive collection of aged vinyls, VHS and books etc.

The warmth, the music and the ambient cultural mixture (mostly from African roots) made me feel at home, but a decade backwards.

My reaction to the two artists’s works were radically different because one called for my intellect whereas the other called forth my sensitivity, but both required to invest my own experience as a human being whole: social background, tastes, personal history, culture, education, etc.
If I had been raised, say, in a Russian electronic laboratory, I might would have felt at home in Kosugi’s exhibition while Burke’s would have been more exotic to me.

I don’t think art is as elitist as many think it is. You don’t need an art degree or to have studied history of art to appreciate an artwork, as the very first step to understanding a piece of art is whether ‘Liking it’ or ‘Not liking it’. I’m not talking about judging exclusively its aesthetic (the debate about beauty in art is long outdated) but confronting it to your own sensibility and everything it includes. No matter how deep and elaborate the artist’s reflection is, the material form it takes cannot escape this most basic form of judgment. But please remember there is an infinity of shades between “I like it” and “This is bullshit”.

So, just as advanced mathematics require some time, interest and maybe a bit of studying, further comprehension of art requires some more commitment than ‘I like’ or ‘I dislike’. There seems to be a common belief that art is nothing more than mere distraction (and a leisure on the maker’s side), and the first thing that comes into most people’s mind when they think about art is The Mona Lisa hung on the wall of the Louvre’s galleries, or a reproduction of it in their doctor’s office. I think the reason is mainly classical painting and classical sculpture being objects of passive contemplation to the regular contemporary viewer, as they are mostly archives of distant contexts and preoccupations which are sometimes lost in the flow of time. Without a thick knowledge of history and history of art, the only thing that is left to be seen is the remarkable proficiency behind these artworks. Contemporary art on the other hand is present and questions the world we live in and the people we live with. It also inevitably inherits the questioning of traditional art which started a few decades ago (or a few centuries ago if we consider history of art as a continuity), giving artists potentially unlimited freedom, and giving art lovers some pain.

But art is not only “contemporary art” and includes countless variations, making it even more difficult to define. I tried to be as exhaustive as I could in this text but I had specific artworks in mind which may not be the same as yours, to which nothing I said may even apply.

Anyway, there is absolutely nothing wrong about not understanding an artwork, or should I say, not understanding an artwork in the way the artist originally intended it to be understood (is it even possible anyway?), unless you do it for a living or your only friends are art snobs. You don’t even need to care about any artist or any artwork at all, but maybe you should at least try, because life without art is sadder than Titanic‘s ending.